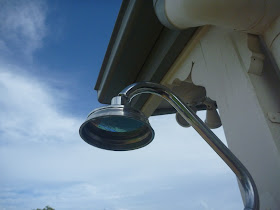 ﻿
This photo that I took of a touch of blue sky and a shower just about sums up our holiday up at the beach. We arrived to a wonderful, beautifully furnished open plan beach house, bathed in sunshine and surrounded by wonderful decks and a gleaming pool. There was a strip of beach scrub filled with birds which separated us from the beach which was doing little to drown out the sound of the waves and it was looking like one of those magical lazy salt filled weeks. From there though it all went a little grey. 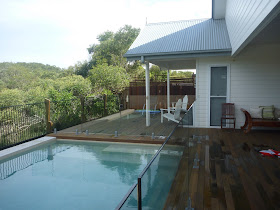 I have no idea where summer has gone, and it was nice..ish for a day or two, but the rest of the time was cold, windy and wet... not a Queensland summer at all. We had booked right on the ocean and thought it would be magic, but it was grey and dreary and that stretch of bush between the house and the beach looked like a sodden story of grey and brown. You forget how much green comes from the sun and the blue of the sky and how much the native scrub turns monochromatic in the overcast skies. Not the usual summer holiday, but many books were read and movies were watched and we are at least more relaxed, if not more tanned. 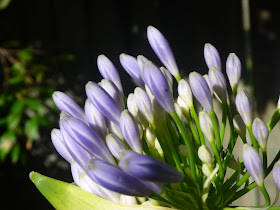 ﻿Coming home I was greeted by my leopard tree now showing the deep green cover, and the agapantus that was just showing its first blush of unfurling purple, which I photographed before we left, is now a glorious crown of purple. Not that I can share it with you because it is still raining and miserable out, but there are a few other spikes showing on the other plants so I will have a ready supply to draw over the coming weeks. I am hoping that it will be a better drawing than the one I completed last year and it will be interesting to compare them and see  how far I have come in a year. it was one of the first botanical pieces that I tried and I look forward to seeing how I have progressed. But first I just need to finish off the larkspur... tomorrow is looking like just the day for finishing it. 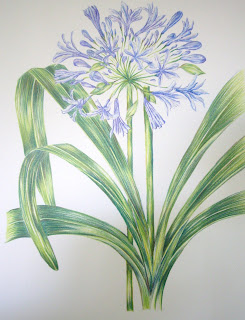